Friday started off well enough.  The big kids went to camp. and the babies stayed with me because they had their 4month check-up in the afternoon. Ed was to take over with them after the doctor so I could work. And then it started to rain. And it rained and then rained some more. We were lucky here, the creeks rose and it was most definitely wet, but we had no flooding.  The towns north of us weren’t as lucky.

I suppose it was luck that my internet wouldn’t connect when we got home from the doctor because Ed had to go out to prep for the flood work that he was surely going to get because of the rain, and Shot Babies were not going to be very good co-workers.  Ed picked the big kids up and was gone by 6. The babies lost their minds by about 7 and were inconsolable for a good hour (until I remembered to give them some Tylenol…because I am a rookie) until I put them to bed. The big kids were hell beasts.  I was not in a good place.

Saturday morning came, Ed was back out working and I was dreading it.  I was beyond dreading it. The kids had chores and I lazed around with the babies and everything was good until just after lunch.  I decided that if we stayed in the house for one more minute, I was going to lose my damn mind and made a quick decision to get the hell out of here.  Quick bottles were made, and I threw the babies and the kids in the car and we went to the park. On the way there I told the kids they could play, but that we were also going for a nice walk while we were there. And they all agreed. I don’t know if they sensed that I was on the edge or what.

We ended up having a really nice afternoon. I got to walk off some frustration.  The kids worked off some energy. It was a good decision. The kids skipped rocks in the creek and climbed all over the playground. We ended the afternoon with ice cream and when we got home, all 5 snuggled on the couch while I cycled laundry. 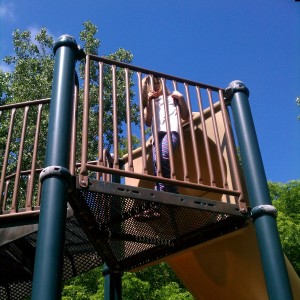 Sunday, Ed and I had plans to meet our PTA board out for breakfast. I had planned on getting a hair cut on the way home while my parents were still with the kids, but Ed had to leave breakfast early because of work and I had to get a ride home. Instead, I brought all of them with me and Cait and I both got our hairs did. From there? We went to the zoo, because why not?

Our zoo is teeny, and is kind of pricey for what you get, so it helped when on the way in, a woman who was leaving handed me a free pass for adult admission, a free parking coupon and a free train ride. They were expiring that day and she couldn’t use them. Ed is always doing stuff like that, so it was nice to be on the receiving end of things, and even nicer to get in for just the cost of the big kids.

With the exception of the snack bar deciding to shut its grills down 2 hours before closing time, the kids had a really nice time.  Everyone was tired and hungry on the way out but promising McDonald’s helped a lot. And we got to see one of the new polar bear cubs, so that made the trip worth it. For me anyway.  Hannah was excited to ride the train and play on the big jungle gym. Eddie and Caitlyn were too big for that, so they climbed trees instead. 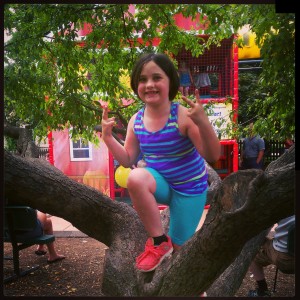 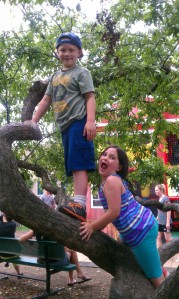 So! Instead of sitting home and being miserable, I embraced my lone wolf status. By the time Ed got home last night, I was beyond exhausted but it was the good kind of exhausted. I wouldn’t necessarily look forward to doing it all again soon, but it wasn’t so bad.

Posted in Uncategorized. Bookmark the permalink.
← Friday Free for All
Thoughts on Twin Parenting–Month 4 →